Light is the best! I love light! And I’d better, because when I’m not writing Science Burrito, light is my job. I’ve talked about light a fair bit already of course. You know by now that it is light that stops you falling through the floor, and cuts your cheese and that light is one of the strongest things in the universe.

I work with lasers. My job essentially boils down to shooting lasers and things all day and seeing what happens to them. It is pretty sweet, I won’t lie, and for this blog, I wanted to show a little bit about how lasers work. And to do that, we’re going to perform a really simple little experiment.

You only need three things for this experiment: 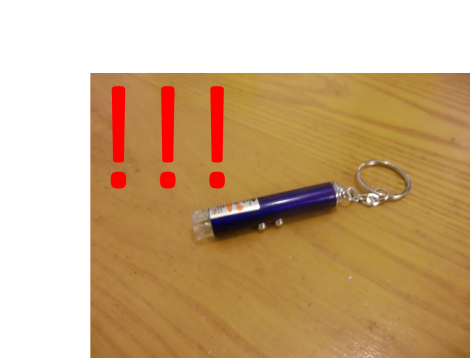 CAUTION! UV light can be dangerous if shone directly into your eyes. You can’t see it, so you won’t know it’s hurting you, but it can damage your vision. Use the UV LED torch with your designated responsible adult only and do not shine it into your eyes!

So, like before, we’ll do the experiment first, and then I’ll take through what’s going on deep down at the molecular level.

First of all, take one of your glasses and fill it with water. 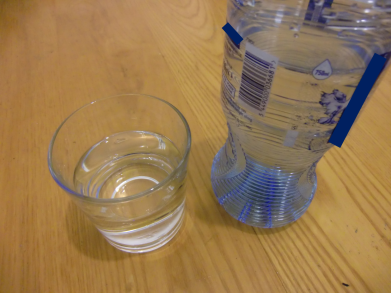 Now, shine your UV torch into it. What happens? 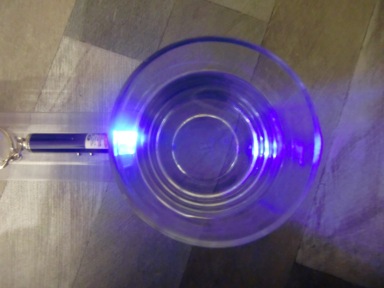 Yeah, basically nothing. Don’t worry though, I only told you to do that so the next bit would look even cooler!

Ok then, take your second glass and fill it with tonic water.

Now, shine your torch through the tonic water. What happens now? 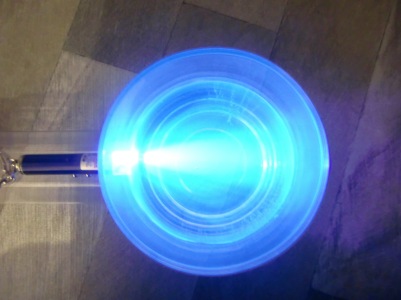 So, where is the green light coming from? Well, it’s caused by something called fluorescence. This is a word you might have heard before; fluorescent jackets for instance. Here is how it works:

White light is actually made up of all the colours of the rainbow. When it hits a raindrop, the colours get spread out and separated and that’s why you see a rainbow.

When light hits something like, say, a leaf, some of the light is absorbed, but not all of it. That’s is what makes a leaf green. It absorbs red light and blue light, but the middle bit of light, the green bit, is reflected back away, so it looks green.

Clear things, like water, don’t absorb visible light. That’s why they are clear, it all just passes right through or reflects off the surface.

But there is so much more light than just what your eyes can see.

This is the electromagnetic spectrum.

Electromagnetism is what light is made of (also electricity and magnetism, it’s pretty awesome stuff). Believe it or not, what makes you mobile phone work is invisible light. Heat? That’s light. Your microwave? That’s light too. When you have an X-ray? X-rays are a type of light as well. The two types of light that are nearest to the visible region, but aren’t actually visible are called infrared (literally meaning under red) and ultraviolet (meaning over violet). The difference between all the different parts of the spectrum is how much energy that light has. Red light has less energy, blue or violet light has more energy.

Generally, things don’t like to have too much energy and they try to get rid of it. Think of a ball at the top of the hill. If you let go, it rolls downhill. Do you remember what we said about gravity back in January? As you go up, you store gravitational energy like a battery. The ball rolls downhill because it wants to get rid of that energy so that it can relax.

So, when we shine the ultraviolet beam at the water, it doesn’t absorb in that region of the spectrum so nothing happens.

But tonic water contains quinine and when we shine it at the tonic water, the quinine absorbs the UV light and it gains a lot of new energy. First, the water gets a little hotter. That is the quinine getting rid of some of the energy as heat. But it still has some energy left. And it gets rid of that energy by emitting light.

Remember that different colours have different amounts of energy. We put in UV light, which has a lot of energy, and some of that energy went into the water. So now the quinine has less energy, so when it shoots out light to get rid of that last bit of energy, it is a different colour. In this case, it is green.

So that’s where the light comes from. And this is exactly what lasers do. We use a powerful light to put energy into a special type of crystal that emits light at a very specific colour, but in the case of lasers, the light that shines after the crystal is excited causes more light to be emitted and that light makes more light, and so on in a chain reaction that makes a laser. I think that’s pretty cool. But we can do one more cool thing.

Shine your UV light into the glass again. If you have a nice straight beam, like mine, then as you slowly move the beam towards the edge of the glass, you should see this happen:

See how it is bouncing around the edge like that? That is called Total Internal Reflection and basically it means that the light never gets out of the tonic water, it just keeps bouncing around inside. This is exactly what happens inside the fibre optics that bring you your broadband internet so you can read this blog. Light is used to send information for miles, bouncing down fibres and not getting out until it reaches the end. The light comes out at the end because it only works at a very specific angle so as you move the beam left and right it will stop totally internally reflecting.

And that’s some of the cool things about light. More to come soon!

2 thoughts on “The Fantastic Light!”